This is a thought that appeared in my head when I quit my job as a physicist and decided that what I really wanted was to be a writer. Mind you, I was 24 years old at the time.

A decade later, and I still think it, no matter how many times I’ve proved it wrong:

Feeling like it is too late to make it is one of these paralysing thoughts that, as an artist, we need to get rid of. And it is not as easy as it seems.

What Does It Mean To Make It?

This is a question that I’ve asked each artist that I’ve interviewed, and I have also asked it on Twitter:

The replies were varied and quite different than I expected. Some people talked about being able to quit their day jobs, others talked about having fans, while some wanted to inspire people with their works.

Making it is not so much a universal goal as it is a very personal scale that helps you judge how you are doing. It’s the visualisation of your dream, it’s the concrete step that you see in your future and think “I’ll get there”.

It is important, when you create your goals as an artist, to know what is your own definition of your “make it” moment, because everything you do should strive towards that goal.

But It Can Change!

A big caveat in what I just said is that your definition of “make it” can (and probably will) change along your career. The more you know and the more other artists you meet, the more concrete ideas you will get about your goals. Your tastes might change too, as well as your passions. You might not even have discovered the “thing” that will make you get up every morning for the next ten years.

Having someone write a fanfiction about one of my stories is my definition of making it. Which is funny, because I only discovered fanfiction when I was 18. Dreams change. Goals change. It’s life.

If Goals Change, Is It Ever Too Late?

I think it is first important to definite “too late”, the same way we defined “make it”. Because, contrary to what you might think, it is not straightforward.

Sometimes, it is true. It IS too late. For example, it is too late for me to be a professional ballet dancer. No matter how much effort I would put into it, it will not happen, because I’ve never taken a ballet class in my entire life. Of course, I could start now, and I might even become good at it, but it is too late to become a professional. I’m also too old to play a teenager in a film, or to become a professional gymnast. “Too late” can also mean that your capacity to do something has been reduced because of an injury.

I really feel for the artists who know that their dream has an objective expiry date. It makes stress and pressure to succeed a million times harder. Often, it means that it comes a time when you have to abandon your dream and grieve for that version of yourself that will never happen.

The good news is: most of the time, it is not objectively too late. You just think it is.

Most of the time, we think it’s too late because of our own perception of our dreams and how we should be. Is it really ever too late to be an internationally famous author? I think someone like GRR Martin would disagree. Is it too late to educate ourselves in a new subject and become successful at it? Vera Wang was an ice skater well before she even considered fashion design.

Society, unfortunately, is one of the main reasons we believe it is too late for us to make it. There are certain expectations that we need to fulfil as an artist. A certain path that you have to follow to success. And if you missed the boat, it’s too late for you!

This school of thought is responsible for an enormous amount of stress on every artist. It seems that everything around you tells you that you won’t make it, that it’s too late, that if you were to be successful it would have happened by now. Rarely you see differing voices like the previous infographic.

We Need an Antidote

Thinking it’s too late because of the pressure society puts on you and the one you put on yourself can act like a poison. Poison to your art, poison to your mental health and poison to those around you. It is a recipe that includes anxiety, bitterness, and desperation.

What we need is an antidote to our “too late to make it” thoughts.

First, make sure that you research and choose role models who will show you that it’s important to never give up on your dreams. I often think about J.K. Rowling and the amount of courage it must have taken her to get back to her book, day after day, while she was extremely poor and had no proof that it would work one day. Read biographies, read interviews and try to understand how they managed to get past their own fear of being too old.

Then, surround yourself of reminders that you can still make it. I have inspirational illustrations pinned on the board in front of my desk, not just because they are pretty but because they help me “program” my brain into a certain way of thinking. You need to “deprogram” the million messages that society has imprinted in you since you were a child, so you need daily reminders of your truth.

Finally, you need to take action and prove to your brain that it is definitely never too late to do something that you really want to do. Choose something that you feel a little silly about doing, because you think it’s too late to learn. It can be small, like learning to make a dessert while you think you’re too old to learn baking. It could be starting a completely new hobby after you retire. The idea is to tell everyone (including yourself): don’t you dare limiting me!

In summary, the antidote recipe is: role models + reminders + concrete proofs. With that kick-ass antidote, you can fight any voice in your head that says that you’re too old or it is too late.

Giving up now would only prove the nasty voices that they are right. Don’t give them the pleasure.

Do you feel it’s too late to succeed? Have you fought these thoughts and won? Or did it make you give up on a dream? Share your story in the comments below!

And if you found my article useful, have a look at my book, The Part-Time Artist to find more strategies for your artistic career! 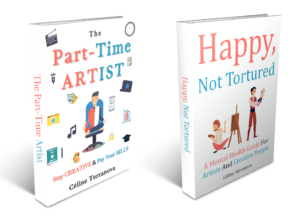